The Workplace Insights Standard – May 2022

A monthly check-in on the pulse of the global workplace, by Locatee. 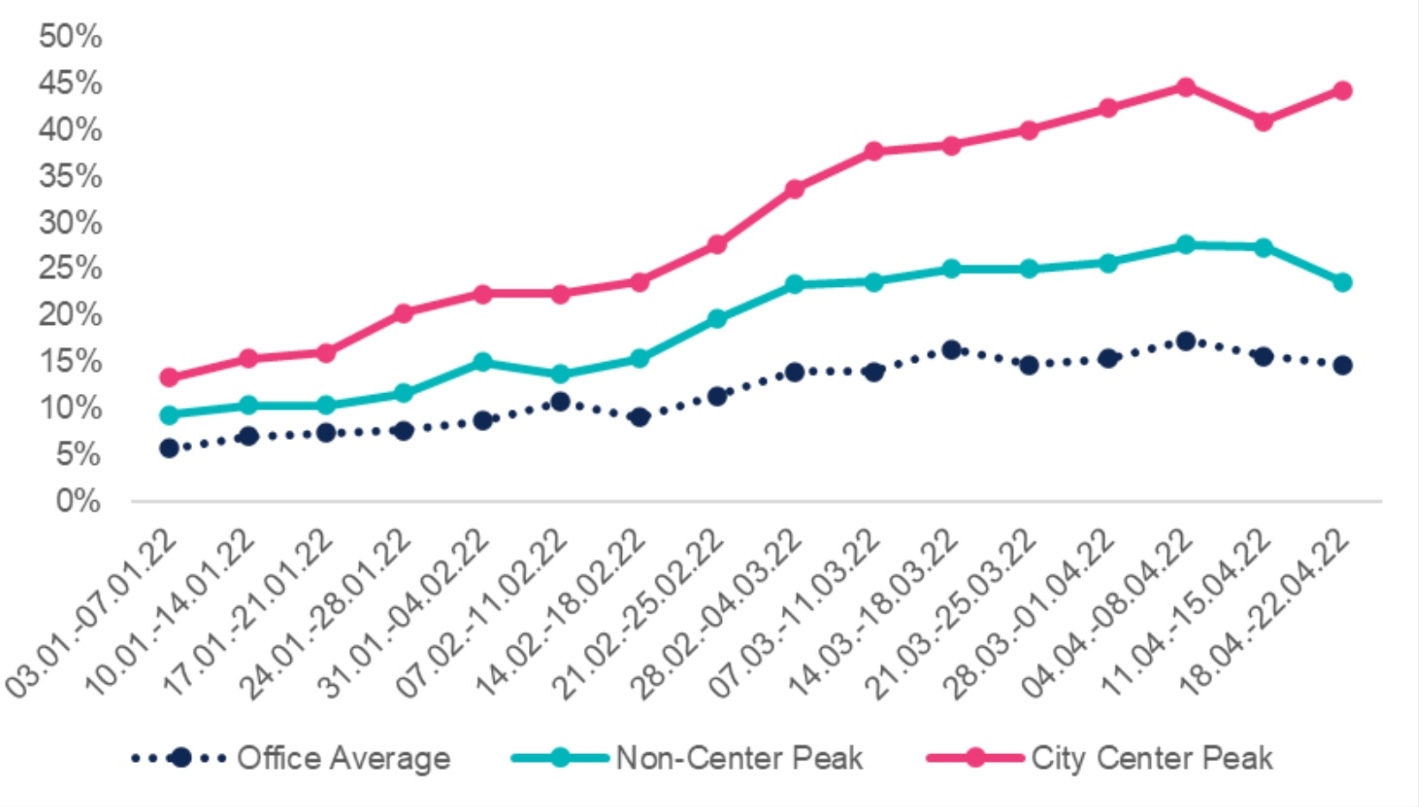 There is a steady increase in attendance across both average and peak metrics, most likely due to the lifting of restrictions across various countries and COVID-19 cases decreasing globally since the end of January.

However, peak attendance is increasing much faster than average attendance. This is most likely due to hybrid working patterns taking roots across countries and industries, and the rise of “punctuated collaboration” moments – identified collaboration rituals within teams for which a large part of that team will gather in the office on specific days in the week.

Predictions around the future of the office have pointed to workspaces increasingly favoring collaboration rather than desk work: let’s look at the data to see how that transpires! 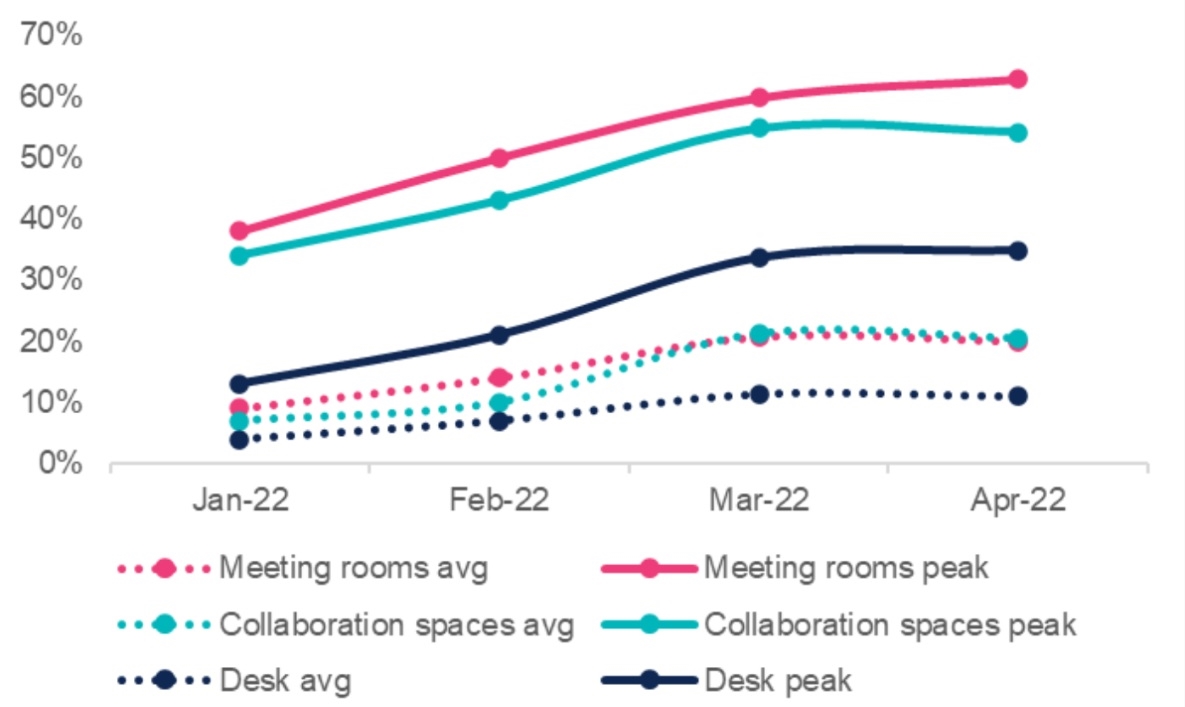 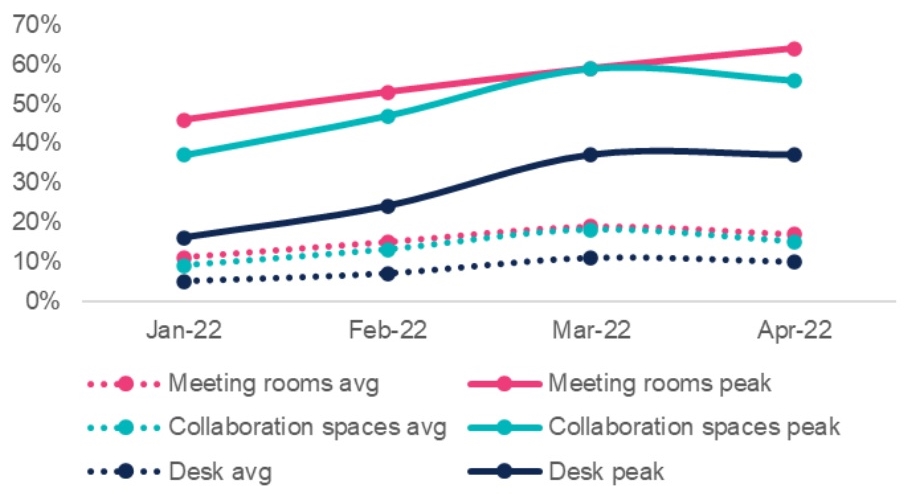 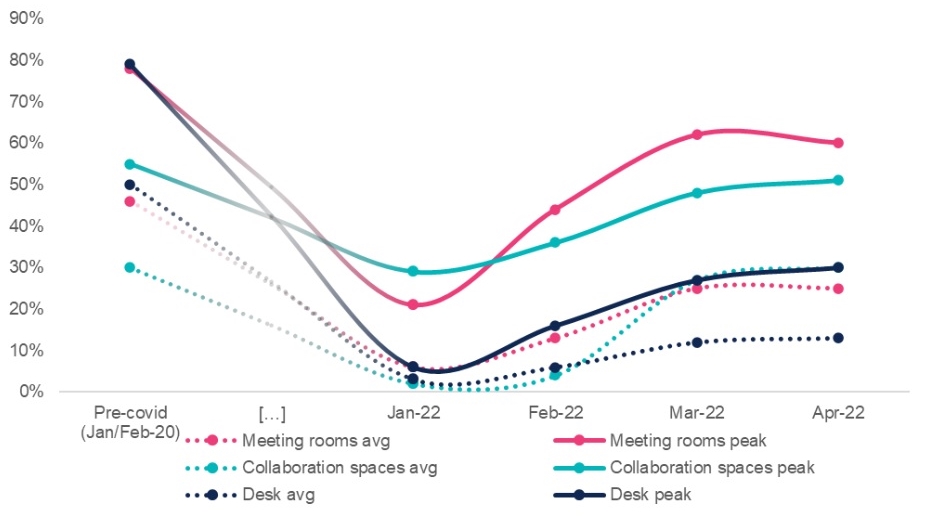 Get regular insights on workplace trends straight to your mailbox

There are clear patterns appearing in the early part of this year:

Meeting rooms and collaboration spaces are more used on average than desk spaces.

Hybrid working and the rise of “punctuated collaboration” as a reason to come to the office are upending this traditional logic. For instance, if pre-pandemic, an office worker was spending five days, 40 hours in the building, they may have spent 30 or more hours at their individual desk (according to research, the typical white collar employee spends an average of 8hrs in meetings per week – 1 hour average meeting duration * an average of 8 meetings per week). However, if that same employee only comes to the office twice during the week for a duration of 12 hours, and during these 12 hours, spends half of that time in meetings, the time spent on the individual desk has decreased from 30+ hours to just 6 hours.

If the average usage of meeting rooms and collaboration spaces continues to increase and does so at a faster rate than the desk spaces, there will be a clear reflection to have for workplace leaders regarding the distribution of space types in their buildings.

This data point is a *very* early confirmation of the above assumption regarding the probable need to re-balance space types. Peak utilization points to a moment (15-min period) in a given time frame (e.g. a week) for which the spaces in question had the highest usage. This isn’t indicative of how many people were in those spaces – i.e. it could have been 1 person using a 10 people room – but is indicative of the highest demand for meeting room spaces.

In April 2022, the difference in peaks between desks and meeting rooms (globally: 28 percentage points) and between desks and collaboration spaces (globally: 19 percentage points) allows for a simple observation: across corporate offices measured by Locatee, the risk of saturation is much higher for meeting rooms and collaboration spaces than it is for desks.

Practically speaking, while the average utilization of meeting rooms doesn’t (yet) signify a trigger to add more meeting rooms, it may have a more intangible consequence of workers deciding against coming in the office due to a perceived lack of availability of popular/regularly requested space types.

Upended usage of the office space

Due to limited availability of data in certain geographic areas, we cannot create a comprehensive comparison of the current patterns with what we could observe before the pandemic.

However, looking at the limited data for Europe, we can see that pre-pandemic the patterns were very different than today:

Today, collaboration spaces have joined meeting rooms as the more in demand spaces, and desk space has seen a significant decrease in usage – looking at both average and peaks.

The premium is placed on meeting rooms and collaboration spaces – the raison d’être of the office of Locatee’s customers becomes clear. What is yours?

Find out where you stand compared to your peers

Raphaël is our PR/AR manager at Locatee. As a young child, he was fascinated with connecting the dots images where drawing lines between disconnected spots created a meaningful and beautiful image. He hasn't changed that much since, as he now tries to do the same with words for a living.

A check-in on the global workplace occupancy trends, by Locatee. Data source: anonymized Locatee customer data in the given time…

A check-in on the pulse of the global workplace, by Locatee. Data source: anonymized Locatee customer data in the given…

A check-in on the global workplace occupancy trends, by Locatee. Data source: anonymized Locatee customer data in the given time…

A check-in on the pulse of the global workplace, by Locatee. Data source: anonymized Locatee customer data in the given…