It’s been exactly a year since we published our first analysis on how COVID-19 shuttered corporate offices around the world. One year later, what does our office occupancy data show us, and can they still help us forecast what’s to come?

In March 2020, we published our initial blog post on how offices around the world were dealing with COVID-19.  At the time, we only had data for the first three months of 2020, and in hindsight, our prognosis—much like that of the rest of the world’s—was optimistic. 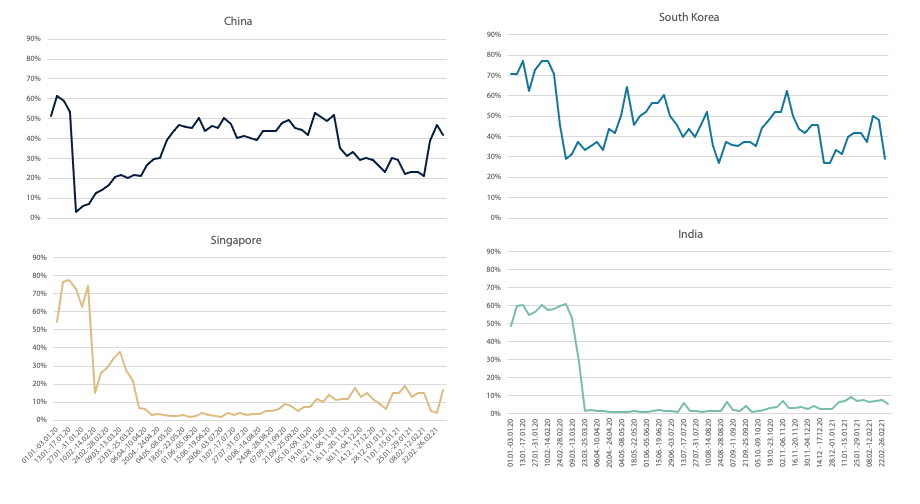 Of all the countries in Asia we’ve gathered data on, China bounced back the swiftest—into the office at least. Since seeing occupancy drop to nearly 0% in the last week of January 2020, the return to the office has been slow but steady. Already in June of last year, average office occupancy was already over 40%. Most recently, we’ve seen a drop in the number of people in the office, but this can also be partly attributed to the Lunar New Year period, where many employees return to their hometowns to spend the holiday season.

Both Singapore and South Korea have been commended early on for their handling of the pandemic, but the two countries have taken very different approaches. Singapore enacted a stringent set of “circuit breaker” measurements aimed at keeping its denizens home, while South Korea embraced extensive testing and avoided enacting nationwide lockdowns. The office occupancy data, as such, reflect the epidemic control programs of the two countries, with Singapore clearly demonstrating a slow and phased return to work and Seoul seeing volatile fluctuations in office occupancy across 2020.

Although India has recently claimed that it might be the first major economy to successfully implement a herd immunity strategy, we’re yet to see a significant rise in office occupancy. Since the government announced a complete lockdown in late-March of 2020, corporate offices have seen very little usage.

As of March 2021, corporate offices across Europe remain low. In fact, if we had only been analyzing data from the past two weeks, it would probably have seemed that things had hardly changed. However, taking into account data from the entire span of the previous 12 months, we can see the efforts of CRE in trying to bring their workforce back into the office responsibly.

In Germany and Switzerland, the effect of the second COVID-19 in autumn is clearly seen. The average office occupancy of both countries had crossed the halfway mark in the “return to normal” before the second wave and new strains of the virus forced both countries to take a step back again. Since then, utilization remains low, with employees mandated to work from home.

Italy and Spain show similar peak occupancy patterns. Lockdowns were imposed in both countries mid-March and restrictions were gradually lifted during summer, although dips in office occupancy are visible whenever a resurgence occurred, such as in October of 2020.

The UK had the lowest average office occupancy in 2020 out of all countries in Europe. Following a stay-at-home order issued in March, office utilization has never peaked past 10%. New lockdown measures brought into effect in November, combined with the discovery of a new virus variant, has kept buildings with no indications of changing soon.

As for the rest of the world, offices remain for the most part empty, with Australia being the notable exception. Due to its geographical distance and isolation, Australia was able to effectively close its borders and carry out successful containment and quarantining measures. As a result, buildings in Australia are much busier compared to the rest of the world.

The American countries—US, Mexico, and Brazil—share an almost identical utilization pattern. Since March 2020, offices have more or less remained closed. Although more traditional sectors such as banking are calling for a return to the physical office, younger and more disruptive institutions have begun introducing permanent remote working setups for staff. It’s safe to say that some companies will never see the same utilization peaks and patterns they were used to prior to the pandemic.

The government of South Africa also announced a national lockdown at the end of March 2020, with a gradual and phased easing of restrictions beginning in May. Office occupancy during the pandemic peaked in the beginning of October, when restrictions were at their lowest. Since then, the country’s second wave of infections has forced the country to tighten restrictions again, forcing staff out of the office once more.

So, what can we expect?

Whereas office occupancy data is used to extract insight from occupant behavior, in this case, we’re taking a retrospective look at offices responding to an external force. So while the data probably won’t be able to indicate exactly what’s to come, it does illustrate the different strategies CRE has taken in an attempt to keep operations running as smoothly as possible.

With the constant uncertainty and need to adapt quick, companies could find booking tools useful in managing the number of people coming into the office on a daily basis. In combination with utilization data, corporations will find it helpful to have both a way to assess occupancy overtime, while also having the means to manage the influx of employees when working from home is no longer required.

For more on making day-to-day workplace decisions, check out The Workplace Leader podcast, available on your favorite podcast platform.

Corporate Real Estate Management Differs Between the US and Europe

As companies begin to head back to the office, we set out to understand the differences between corporate real estate…

The State of Corporate Real Estate in the US: Big goals, limited action

There are big changes happening in corporate real estate. While the ambitions are high, the actions being taken are insignificant.…

We introduced an update to Locatee’s Portfolio Insights at the end of last year. Today, we’re thrilled to unveil the…

Corporate Real Estate Management Differs Between the US and Europe

As companies begin to head back to the office, we set out to understand the differences between corporate real estate…

The State of Corporate Real Estate in the US: Big goals, limited action

There are big changes happening in corporate real estate. While the ambitions are high, the actions being taken are insignificant.…

We introduced an update to Locatee’s Portfolio Insights at the end of last year. Today, we’re thrilled to unveil the…